In honor of Black History Month, we reached out to several prominent Black leaders in the mortgage industry to celebrate their success, learn from their experience, and gain insight into the challenges facing the mortgage industry today. Today we’re excited to share this interview with Congresswoman Gwen Moore, U.S. Representative for Wisconsin’s 4th Congressional District.

Gwen shares what inspired her to run for public office, the integral role she’s had in shaping housing finance, why Black Americans are experiencing the lowest homeownership rate in decades, and what we can do to fix it.

When did you first become interested in politics, and what was the driving factor that led you to seek public office?

Like a lot of young African Americans of my generation, I was inspired by the Civil Rights Era and knew that I had to do my part. I am a little younger than the first wave of heroes who were winning basic accommodation rights, so I found my stewardship in taking up the mantle of economic empowerment.

This vision stayed with me. I saw an opportunity to build upon his work in my own community when I witnessed underinvestment in my neighborhood and a lack of access to capital. It inspired me to start a community-based credit union that could benefit my community, which is still in operation in Milwaukee, called Cream City Credit Union. I worked at the Wisconsin Housing Development Agency and it really was that work in the field of economic empowerment that launched me into the public eye. There is an old political adage that “if you’re not at the table then you’re on the menu,” so I ran for office to ensure that our city had political representation from people with my background. I served in the Wisconsin State Assembly and eventually ran for Congress in 2004 and have represented Milwaukee since then.

You’ve previously served on the House Financial Services Committee and now on the tax-writing Ways and Means Committee. Could you share some of the issues that you’ve worked on in support of our housing finance system?

Pretty much everything I have done in Congress has had the North Star of empowering poor people, and that has always meant working on housing issues.

The biggest change we have seen in housing markets unfortunately came about as a result of the 2008 Financial Crisis, which had a lot of contributing factors but at its heart was a failure of proper regulations in the housing finance market. I will never forget that time in life. It was a terrifying period, but I am really proud of the work we did in the wake of the crisis to enhance and strengthen our financial and housing finance systems in the Dodd-Frank Wall Street, and Consumer Protection Act.

We created the Consumer Financial Protection Bureau, which, in turn, has recovered billions in fraud for consumers and wrote rules around so-called Qualified Mortgages to stop the abusive practices in mortgages and housing lending. We created the Housing Trust Fund to help fund low-income housing. We allocated money for neighborhood stabilization. I truly believe that this extended period of financial stability and economic expansion is a direct result of Dodd-Frank.

Every year, I lead the fight to fund McKinney Vento homeless assistance grants, securing $2.7 billion in fiscal year 2020. Of course, I was the lead on the 2013 authorization of the Violence Against Women Act, which has a housing component to protect victims and family members of domestic abuse obtain and keep safe housing. Additionally, I have drafted legislation that would support the Federal Home Loan Bank system, which helps support the construction of affordable housing in Wisconsin, and legislation that helps people who can’t afford a full 20-percent down payment on a home secure a mortgage through the responsible use of mortgage insurance. I passed legislation that provides funding for Native American tribes to build low-income housing. I passed through the House legislation that secured safe shelter for LGBT runaway youth. I have pushed amendments that protect the Housing Trust Fund.

It is a snapshot of the work that I have done on housing, but it is a passion of mine and I am always looking for opportunities to enhance our housing markets.

We have a growing economy, with extremely low unemployment, and yet the minority homeownership rate is the lowest it’s been in decades. What do you see as the first step in helping to fix this problem?

I balk when I hear other politicians brag that our economy is now somehow great and brag about how the unemployment rate is low. Yes, the stock market is up, and some people are doing fantastic, but the right question is who is the economy truly working for? Sadly, there are too many Americans who are forced to work multiple jobs just to stay afloat. Sabotage of the Affordable Care Act by the Administration is undermining access to affordable healthcare for many Americans. Meanwhile, education, which is the gatekeeper for many good-paying jobs, is only getting more costly and inaccessible. Most Americans don’t have stocks, so that positive aspect of the economy is not having any positive, direct impact on them. We really need to look beyond GDP and stock market gains to understand how the economy is performing for regular Americans.

Unfortunately, this economic disparity disproportionately burdens Black Americans. That’s why expanding access to homeownership requires a multi-pronged approach because the issue isn’t isolated to the other issues like our wealth and education gap. We need access to good-paying jobs that can give Americans the opportunity to thrive. To truly tackle this issue, we must expand access to educational and economic opportunities that will ensure Black Americans have the financial resources to purchase homes.

Turning from Washington, DC to Milwaukee, what sort of activities do you enjoy doing to help remain connected to the people you represent?

I love that when I fly home from DC, I can attend local community events and really connect with Milwaukeeans. I always enjoy attending Community Brainstorming Conferences, festivals and forums where I can really get a pulse on the concerns of Milwaukee residents and forge bonds in the community.

What’s your favorite thing about Milwaukee?

It’s so hard to pick one thing, but it would have to be the people. I am so blessed to represent a city full of hard-working and kind people that look out for one another. It’s why I enjoy serving Milwaukee so much.

What does the word “homeownership” mean to you?

Homeownership is more than just owning a piece of property. To me, homeownership means having a space that you can call your own, where you can establish deep roots by building relationships and being part of a community.

The opinions and insights expressed in this Q&A are solely those of its interviewee, Gwen Moore, and do not necessarily represent the views of either Mortgage Guaranty Insurance Corporation or any of its parent, affiliates, or subsidiaries (collectively, “MGIC”). Neither MGIC nor any of its officers, directors, employees or agents makes any representations or warranties of any kind regarding the soundness, reliability, accuracy or completeness of any opinion, insight, recommendation, data, or other information contained in this blog, or its suitability for any intended purpose. 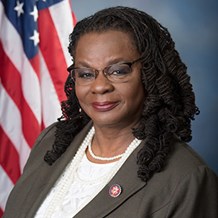 Congresswoman Gwen Moore was elected to represent Wisconsin’s 4th Congressional District in 2004, making her the first African American elected to Congress from the State of Wisconsin. She is a member of the esteemed House Ways and Means Committee, which is the oldest committee in the United States Congress and has jurisdiction over the Social Security system, Medicare, the Foster Care System, Temporary Assistance for Needy Families, Unemployment Insurance, and all taxation, tariffs, and revenue-raising measures. She serves on the Oversight, Select Revenue Measures, and Worker and Family Support Subcommittees.