In honor of Hispanic Heritage Month, we reached out to several prominent Hispanic leaders in the housing and mortgage industry to celebrate their success, learn from their experience and gain insight into the challenges facing the mortgage industry. Today, we’re happy to share this interview with Armando Falcon, CEO of Falcon Capital Advisors LLC and former director of the Office of Federal Housing Enterprise Oversight (OFHEO).

Tell us about your background growing up, and who influenced you along the way.

I grew up in San Antonio, Texas, where my family has lived for over 5 generations. Like many other Mexican-American families in the area, we did not move across the border to live in the U.S.; rather, the border moved across us when the area became part of the United States. Military service runs strong in my family. My grandfather fought in WWII as a seaman on a U..S battleship. He had a thick hide from many years of hard labor but was a gentle, compassionate soul with an inner strength that made me want to be just like him.

What made you decide to get into the world of politics and government, and specifically, what brought you to the financial side of things?

My congressman for 36 years was Henry B. Gonzalez. He was a revered figure in the community, known as someone who would fight for the little guy against any injustice. He was an attorney, so that inspired me to also become an attorney. No one in my family had ever earned a college degree, but Henry B. was a role model who showed it was possible. From observing him, I learned that public service was the path to being able to have the greatest impact for the public good. When he took over the chairmanship of the House Banking Committee, he hired me to be a counsel to the committee, and that started my career in the financial services sector.

You were the director of the Office of Federal Housing Enterprise Oversight (OFHEO) before the financial crisis. Take us back and help our readers understand what OFHEO’s job was, the extent of its power and authority, and the politics involved in regulating the GSEs at that point in time. How does that compare to the current situation with the Federal Housing Finance Agency (FHFA)?

I took over OFHEO at a time when it was struggling to find its footing as a very young agency. Some important members of Congress were calling for the agency to be abolished and start over. The fact is the OFHEO was almost designed to fail. Fannie and Freddie had a strong influence on the law that created the agency, and the GSEs made sure the OFHEO lacked many of the key powers that other regulators had and needed to be successful regulators. So, I took over the agency at a time when it was structurally flawed, and yet was asked to regulate two giant GSEs that were at the peak of their political power and industry influence. I was facing quite a challenge when I took over the agency, but I believed in its mission and wanted to make it work right.

The first significant indication that something wasn’t right at the GSEs was their 2003-04 accounting scandals. Tell us about that and what did we learn from the experience?

Fannie and Freddie became obsessed with pleasing Wall Street analysts and investors. Freddie nurtured an image of “Steady Freddie” (quarterly earnings), and Fannie promised that it would double earnings in a few years. With much arrogance and a corrupted corporate culture, they started breaking accounting rules to meet their goals. They hid their misconduct, but warning indicators started to develop so the OFHEO launched special accounting exams of the GSEs, which uncovered and fully documented the fraud that occurred. We began a long process to clean up the operations of the GSEs. Executives were removed, financials were restated, and risk management was overhauled.

The deepest flaw in the GSEs was also the most difficult to quickly exorcise. That was the culture of arrogance that was embedded in everything the companies did. That same arrogance is what ultimately led to their getting placed into conservatorship in 2008. They invested heavily in subprime mortgages, believing that they could easily manage the risk of defaults. They were wrong, and that was the start of the long bailout.

Thinking about the reforms that have happened to the mortgage finance space, what do you see as being the most important reform in terms of preventing another crisis?

The most important preventative change has been the focus on maintaining prudent underwriting standards. Everyone from regulators, investors, insurers, and rating agencies are now policing underwriting standards. Massive amounts of subprime loans drove a housing bubble that eventually burst and set off the 2008 financial crisis. When we have another down cycle in the mortgage market, it won’t be driven by subprime mortgages. The trick for everyone now is to be alert and find and fix what might cause another mortgage crisis before it happens.

As you consider the current landscape, what do you see as the major issues that policymakers need to focus on to ensure the health of housing and mortgage finance in this country?

There are two big issues to deal with right now. The first is addressing the hardships that the pandemic has placed on borrowers and renters. The government is very focused on this, but moratoriums and cash assistance only last for so long. There is a need for long-term solutions to address the potential homelessness and collateral societal damage to housing needs. The second issue is housing affordability. It’s well-known that there is a severe shortage in the availability of affordable homes. This keeps driving housing prices up and we are caught in a vicious cycle. This problem, by its nature, requires a long lead time to fix. The government needs to work with the private sector to develop innovative solutions to the problems.

Stepping away from the policy questions, tell us about Falcon Capital Advisors, and some of the other things you’ve been involved with over the years since your time at OFHEO.

I enjoy leading a management consulting firm with many talented individuals. We are especially focused on helping the mortgage industry address any operational or compliance matters. A fast-growing area of the firm is the digital mortgage advisory group. The mortgage industry is quickly pivoting to remote online notarizations for closings and paperless mortgages. We are helping Ginnie Mae launch and expand its eNote program, and we are assisting large and small originators to transform their operations to transact in digital mortgages. The mortgage process will look much different in 5 years.

Finally, let’s pivot to the personal. How do you enjoy spending your free time, and what are you looking forward to the most once we’re on the other side of the pandemic?

I enjoy traveling to explore this big planet, fishing and golfing. When I can combine all three, I really have a good time. I want to get back to that as soon as safely possible. I also look forward to being able to get more involved in community activities that help those who are less fortunate. My grandfather didn’t have much money, but he would collect clothing and shoes to deliver to poor kids in a little town in Mexico where he had relatives. I try to honor him every day with how I live my life.

The opinions and insights expressed in this Q&A are solely those of its interviewee and do not necessarily represent the views of either Mortgage Guaranty Insurance Corporation or any of its parent, affiliates, or subsidiaries (collectively, “MGIC”). Neither MGIC nor any of its officers, directors, employees or agents makes any representations or warranties of any kind regarding the soundness, reliability, accuracy or completeness of any opinion, insight, recommendation, data, or other information contained in this blog, or its suitability for any intended purpose. 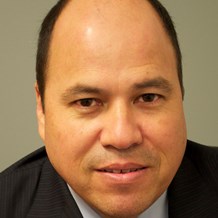 Mr. Falcon previously served as the director of the Office of Federal Housing Enterprise Oversight (OFHEO) from 1999 - 2005. As the presidentially appointed and senate-confirmed director of the agency, he served as the chief regulator for Fannie Mae and Freddie Mac, and played a key role in overseeing the U.S. secondary mortgage market and the stability of the U.S. housing finance system.

Before his appointment as the director of OFHEO, Mr. Falcon served as the General Counsel for the Committee on Banking and Financial Services of the U.S. House of Representatives. Over that 8-year period, he was responsible for advising the Committee on financial regulatory issues and he played a key role in drafting major legislation.

Mr. Falcon currently serves on several corporate and government boards. He earned a bachelor of arts degree from St. Mary’s University, a master’s degree in Public Policy from Harvard University, and a law degree from the University of Texas.